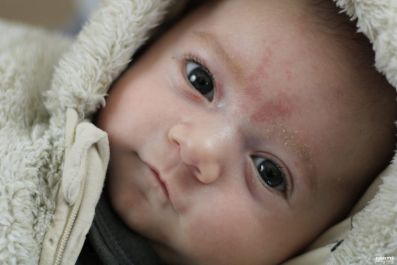 Hi, I am Wiela Rossouw and I am from Durban, South Africa.

My sisters’ beautiful little boy, Ewandrú 3 months old, was rushed to hospital, not breathing on Saturday morning at 06:00. The nearest hospital was Lenmed Private Hospital, and they don’t have a medical aid.

Friday, the 27th of May, he was well enough to go for his 6 week injection. He was drinking his bottle the evening, woke and gave a strange cry at 03:00 but being his feeding time, my sister gave him his bottle, which he only drank 30ml of. My mother took him to try and finish the bottle, but he fell asleep, or so she thought, and she put him down in his cot and went back to bed.

Saturday morning, he didn’t wake for his 06:00 feed. She checked on him and found him unresponsive & blue in the face. That’s when they rushed him to Lenmed Hospital. She was told that he is brain dead and collapsed his left lung. An MRI was done which showed brain function and they put him on life support. They kept him in casualty while searching for a provincial hospital that could accommodate him.

He was transported 2 days later via ambulance to Nelson Mandela Children’s Hospital where he is still on life support. He moves his hands & feet but can’t open his eyes or urinate. They transferred from a private hospital; but they are now charged private rates & need to pay a deposit.

They must still pay for Lenmed, blood tests, the MRI and the ambulance to the children’s hospital. They have done another MRI today again and the results will be discussed tomorrow.

He is still on life support with 100 percent oxygen because he is not breathing by himself and can’t open his eyes. Please help us to pay the bills as only his Dad is working. They used their rent money to pay a deposit for the MRI to be done at Lenmed.

If we can raise the funds for hospital bills, they will have less stress looking after their 4-year-old daughter.

For GBP, USD, EURO & others, please click on currency converter to calculate your Donation in ZAR.

FROM WITHIN S.A
Check your phone/email for a ‘One time pin (OTP)‘ to complete the transaction. Ensure that your debit/credit card is set up for online payments. Alternatively, use ‘INSTANT EFT’ or ‘DIRECT DEPOSIT / DIRECT TRANSFER’.

FROM OUTSIDE S.A
Check your phone/email for a ‘One time pin (OTP)‘ to complete the transaction. Pay using a VISA or MASTERCARD. Ensure that your card is set up for online payments. Alternatively, use ‘INSTANT EFT’ or ‘DIRECT DEPOSIT / DIRECT TRANSFER’.