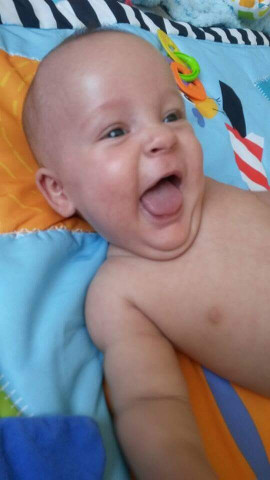 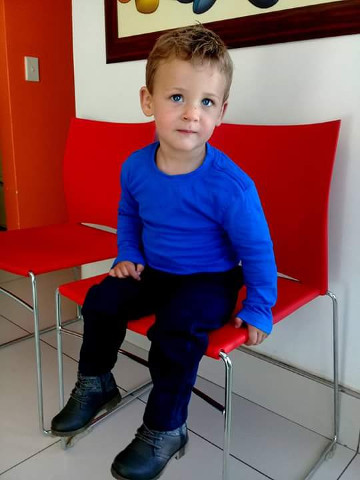 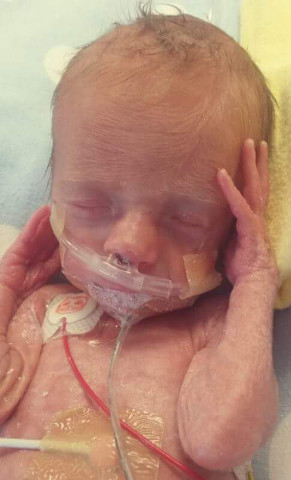 Falling pregnant with Chase was a miracle in its own right, My husband Dane was diagnosed with Scheuermann’s disease when he was younger as well as Congenital adrenal hyperplasia deficiency which he needed to be on high doses of cortisone a day to stunt his growth and this could have caused him to be infertile but we fell pregnant with our son Chase with no issues. We didn’t have the easiest pregnancy, but I am sure if you asked any women she would tell you that pregnancy, in general, is not easy. I got the flu in the early stages of pregnancy and being pregnant, you are very limited to what you can take. I was so sick I would cough like crazy and throw up non stop, I literally had the flu right up until our son’s birth. At 16 weeks I started to bleed and we rushed off to the hospital.

We were kept overnight for observation and we’re told it was a severe bladder infection, which they treated, thankfully our son was still fine. At 20 weeks we were involved in a car accident where a man in a large bakkie hit us from behind, my car had come to a full stop when the motorist hit us at full speed whilst on his cellphone. My car was pushed into the barrier and went a further 200ms from the site of impact. Luckily both my passenger and I were wearing seatbelts and walked away with minor injuries as well as the man who hit my vehicle.

My car was a right off. The ambulance took me to the hospital so we could see if my son was still okay. My gyne was unavailable so we were seen to by a nurse in the emergency room who brought a Doppler so we could hear his heartbeat for peace of mind. We heard his heart and made an appointment to meet with our gyne the next day. At the gyne, we saw our son on the monitor and everything appeared to be okay so we left very happy.

At each and every scan and gyne appointment our son Chase appeared to be developing normally and he looked healthy.
At 28 weeks whilst at work, I was concerned because I hadn’t felt my son move for 2days I had only felt he’s hiccups. My husband and I decided it would be best to go to the nearest hospital and check him out. We went to Sunninghill hospital and we were put on a monitor so they could monitor Chase’s heartbeat, once again, everything seemed okay and we didn’t suspect much of anything maybe he was just lying more towards my back. We met with a gyne at the hospital who checked Chase out thoroughly. The doctor looked concerned. He said our baby’s femur bone measured 28 weeks, but that his stomach measured 26 weeks, so he wasn’t growing as he should. He said that Chase was in distress and if he was our doctor, he would deliver him immediately. He suggested we make an appointment with our usual gyne right away. We left the hospital in a state and rushed off to our usual doctor at the Linmed in Benoni.

Our gyne was unavailable, so I was kept for further observation and an appointment was made with another gyne in the meantime. Once again the doctor did not seem too concerned and kept us overnight until we could meet with our usual gyne, in the meantime, they monitored Chase on a monitor. When meeting with our gyne, he checked the reports and said we should meet again in another 2 weeks because everything appeared to be normal, but to be safe he wanted me to be monitored for a further hour. When the gyne came to the rooms and checked the report he put the report down, looked at my hubby and I and said right are you guys ready to be parents because this baby is coming today we are prepping you for an emergency c-section. He said that Chase’s heart rate was dropping significantly. I was prepped and rushed off to surgery. Chase was born at 12:58 in the afternoon on the 17th of September 2015, he weighed 870grams and measured 34cm.

I didn’t even get to see him until the next day. He was so tiny, it was terrifying. The pediatrician met with us and suggested he be moved to Parklane Hospital in JHB as they had a bigger facility and specialised in such tiny prem babies. Chase and my husband left the same day in an ambulance to Parklane. We were told to take it a second/minute of a day at a time. Whilst I was in the hospital all I could do was express milk for him so my husband could drive up and down between us to take it to him.

Chase was kept on oxygen and tube fed. He started off on 1ml of milk, which eventually he couldn’t stomach and was kept on a special formula for 2 weeks until he could stomach milk again. His oxygen would go up and down constantly, he started off with the regular nasal cannula and as his oxygen demands increased he was moved over to Cap and then back to the nasal cannula. Chase also had Edema, which is water retention all over the body. Regular screening, testing, poking and prodding of needles was done. Chase’s eyes were tested and thankfully his eyesight was given the all clear. Chase also had regular x-rays and he was diagnosed with chronic lung disease which is apparently common in tiny prems.

Chase also had a scan done on his brain to check for any abnormalities or bleeds. I was taken aside by Chase’s pediatrician and she told me that Chase, unfortunately, had a bleed occur in the brain while in utero because the bleed had already dried. Before discharge after spending 3 months in the hospital, Chase went in for a Bilateral inguinal hernia op, all went well. Chase’s pediatrician took us to a room where she told us that Chase’s future could be a very grim one as he may never Sit, walk or even talk, she told us that he could have severe cerebral palsy or he could have mild cerebral palsy but that due to the placement of the bleed Chase would definitely have problems with his ability to do certain things.

She told us that we should consider one of us staying at home with him so that we could give him all the Love and care that he might need and so we could dedicate our time to taking him for therapy.
Without even giving it a second thought I resigned from my job and at 4 months Chase started physiotherapy and later on speech therapy. Chase is now a healthy, gorgeous 2 year old and thanks to a lot of Prayers, hard work, love and support Chase is now able to walk and he can say more than a few words! However, Chase has a right hemi, which means the right side of h body is affected. Chase cannot walk or run properly and often falls because his muscles in the right leg are not as strong as the left and cannot keep up with this amount of physical activity.

Chase needs to have Splints on both his legs to help correct this as well as special shoes to fit the splints. Due to us having high medical expenses over the past 2 years we have incurred a huge amount of debt and we are unable to afford the Splints and shoes which we will need to get every 10 months as Chase grows. As parents, you do everything in your power to better your children’s future the best you can and we would greatly appreciate any financial support that we can get to help Chase achieve his highest potential in life.