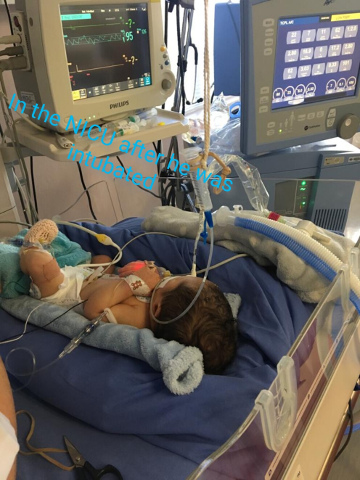 Baby Jesse’s fundraiser
I gave birth to my beautiful baby boy Jesse on the 9th of January at The Clinton Hospital. He immediately turned blue after the umbilical cord was cut. He was sent straight up to the NICU and placed on breathing aid called CPAP, that night while he was in the NICU he had an episode and was intubated. Cardiologist from the Sunninghill came out that night and assessed my sweet baby boy and found out he had Congenital Heart Defect called Tetralogy of Fallot. It’s 4 defects in the heart, the main one being that the pulmonary valve is too narrow to allow enough blood flow to the lungs.
He was then placed on a medication called Prostin which allows the PDA to stay open so there is blood flow to the lungs. He was transferred to the Sunninghill on the 14th so he could get the best care and see what would be the next step forward. It was decided that he would have a stent placed via the groin on the 16th but the procedure was unfortunately unsuccessful.
After discussing with the surgeon it was decided he would undergo his first Open Heart Surgery the very next day. On the 17th of January weighing on 2.8kgs he had a shunt placed in his heart to allow blood flow to the lungs and his PDA was closed. This was only a temporary fix until he was big enough to have the full repair to his heart.

In early June we went for a check-up and the cardiologist was a bit concerned so he booked us in for a cath procedure to get a better look at his heart on the 5th of June. After his Cath and discussing with his surgeon they decided not to wait any longer to do the repair so on the 14th of June at just 5 months weighing only 6kgs my baby went in for his second Open Heart Surgery. We were updated 2 and a half hours in that they procedure was going well.
The doctors then notified us that the procedure was done and they were going to warm him up and assess the repairs. After an hour I received a message that they are trying to control an unexpected bleed. We were then called into the ICU to meet with my baby’s surgeon who told us that they are in danger in theatre as they cannot stop the bleeding into the lung. He said to us that it’s really bad and that he might not make it out of theatre. We went back to the waiting room and gathered the strength to notify everyone to pray. As we started to pray I received a call that they are bringing my baby boy out of theatre and we could meet with his cardiac team.

They told us that they had managed to stop the bleeding and it was now up to him to recover. My boy was brought back to ICU on ECMO (providing prolonged cardiac and respiratory support to persons whose heart and lungs are unable to provide an adequate amount of gas exchange or perfusion to sustain life) with his chest open, ventilated, many drains and pipes, sedated and on many different kinds of medications. He was swollen to about 3 times his size.

By the very next day we saw the surgeon and he informed us that there was already progress and they would make a decision the next day on when to remove the ECMO. It was removed on the 17th of June and his chest closed up on the 18th of June. From there my baby boy just progressed and progressed after being exudate he was soon breathing room air and his SATS were up. He was moved down to the Paediatric ward where we had a short stay due to diarrhoea from the antibiotics. After being discharged we have already been for our first check up where doctor is happy with everything. It’s only through the grace of God and everyone’s prayers that my baby boy made it through. I have seen God’s hand over my son life and continue to see His work. We are so blessed with excellent a surgeon, cardiologist, lung specialist, anaesthetist and many loving caring nurses. God has been there from the moment my baby was born until now. He is still here and still working.

We are on medical aid but we do not gap cover. And Jesse will require many check-ups and will require another surgery in plus minus 8 years time depending on his body. We do have many co-payments to date and will maybe receive more.

Thank you for your support and generosity.

God bless you all.