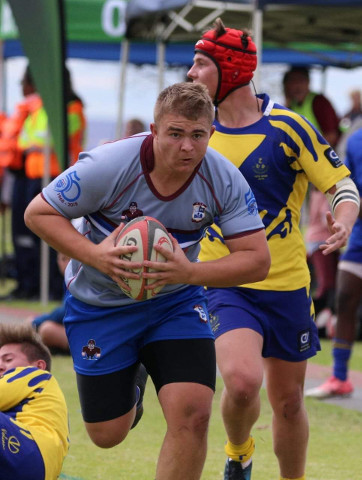 Delarey Swart is a motivated and determined 18 year old matriculant to the Hoërskool Generaal Hertzog.

At the age of 2 Delarey broke his neck in a car accident. Various doctors advised him to stay away from any contact sport. Throughout Dellas’ primary school career he was made water boy to make him apart of the team as he wasn’t allowed to play. His dad was a professional rugby player and played 159 matches for the Pumas and his biggest dream was to walk in his father’s footsteps.

In high school he was made team manager, Della went to each rugby match even though he wasn’t allowed on the field. He supported his team with all the passion and love he had for the sport.

In 2016 Della asked his mom a very important question, “Why am I not allowed to play but Schalk Burger had a neck operation and he was?” His mom took him to a neurosurgeon, repeated MRIs was done and the doctor did overseas research on such type injuries and gave them the good news that Della was found medically fit to start his rugby career.

In 2017 Della got selected for U/16  AVS Bokkie Week and he got awared honorary colours for rugby.

During 2018 Della played for the first rugby team, he got awarded Player of the year 2018, got awarded honorary colours in rugby again and he was selected for the U/17 Puma team and played in the Rhino week.

For Della to join the tour he needs to raise some funds. Help us make Dellas’ live his dream, by donating. every sent helps and we are so grateful for each donation.

IF DONATING IN ANY OTHER CURRENCY PLEASE USE PAYPAL PAYMENT GATEWAY