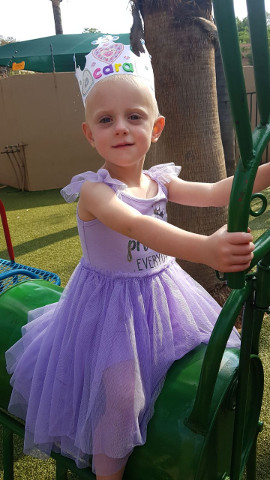 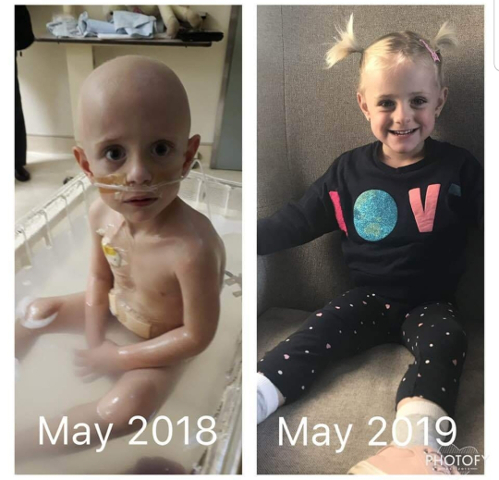 Born prematurely at 28 weeks on 3 October 2015, little Cara’s fight for life started on day 1. Upon being discharged from hospital 6 weeks later, Cara immediately showed the world that she has a very strong will to live and to fight for life.

Cara strengthened and worked her way through the ranks of being a tiny baby, however, in March 2015, at the age of 1 year and 3 months’ things changed drastically. Cara had developed a visible lump in her belly, which led to scans and blood tests. Unfortunately, the results were heart-breaking for all who know and love Cara, especially her parents and closest family. Cara had a tumour (neuroblastoma) in her stomach the size of a big orange. It was nestled around her main artery, and had to be treated immediately.

So Cara’s journey with chemotherapy commenced and the doctors worked on her tumour for 7 months to reduce the size in order to enable surgery to take place. Cara reacted fairly well to the chemo, however this took its toll both physically and mentally after the extended period of time demanded by the chemotherapy.

Cara eventually undergone a life threatening operation in November 2017 to remove the tumor. The specialists worked on her for 5 hours, and the operation was successful. However, the recovery period led to her being extremely sick for 2 months. Through non-stop Prayers and well wishes Cara healed, which enabled her to go to kindergarten for the first time in 2018.

She enjoyed being a little girl, grow hair and living life like a toddler should with no hospitals, needles and stress.

Unfortunately, in July 2019 Cara went for a routine scan at the hospital, which showed that 2 small tumors have grown back in her stomach and placed close to her main artery.

Currently, Cara has to undergo PET scans which will enable the specialist to decide on the best treatment method for Cara. Ultimately, this will lead to a further operation to remove the tumors as soon as possible so that the healing process can start again.

We Pray, believe and trust that Cara will once again display her will to live, and that she will be healed once and for all.

She deserves only the best and has her whole life in front of her.

Her medical aid insurance does not cover all the expenses, which inevitably stack up in such cases. We will sincerely appreciate any form of donation towards Cara’s medical bills to ensure she receives the best treatment possible.

Thank you for being a part of Cara’s journey, we look forward to let you know when she is ready to run for President!!